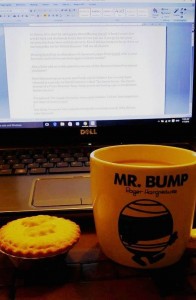 An Interview with author Peter Best

So Simon, let’s start by asking you about Missing Gretyl! A book I read a few weeks back and absolutely loved. But it’s not just me, if you go by the great reviews that have been written about it. Also it always seems to be up there on the bestseller list for British Humour. Tell me all about it.

Thank you, Peter. I’ve been blessed with some wonderful feedback and reviews from my first comedy novel.

I hadn’t considered the impact of how a good review would make me feel until they started to arrive, and to date, I’m only four short of 100 five star reviews. Delighted is an understatement!

Missing Gretyl has an abundance of characters. Apart from Gretyl, who is your favourite? Will we see them again in future novels?

I’m not sure I have a favourite, as all the characters are like family to me!

Yes, you will see most of the characters again in the sequel! Without giving any spoilers away, there is some unfinished business concerning the villas in Marbella, and the village of Poncey Bridge will feature far more in the follow up. Also, there is the small matter of how Gretyl might wish to spend some serious cash along the way!

Also a little add on to this question, are any of the characters based on anyone you know?

Great question. Yes, if I’m honest, they are. My grandmother who I called nanny Biss (Who I used to meet at the bus stop when I was little), was a lot of fun, full of cheeky banter, and someone who mattered a great deal to me. Up until my late teens, we met every Saturday lunch time for two sausage, egg, chips, beans and bread and butter with a large cuppa, at a cafe just off Romford Market. I miss those times.

Also having previously worked as a Pastor for nearly nine years and having some colourful jobs when I was younger (carpet fitter, debt collector, insurance agent, recruitment consultant, mortgage broker) I can honestly say that there’s enough comedy material there to last me a lifetime!

When I consider the characters in Missing Gretyl, I have drawn upon my experience of growing up in Romford, Essex, to colour the language and behaviour of Albert & Gretyl Trollop, not to mention, Dave and Sharon Soddall.

There are elements of their character that were important for me to sketch into the book. For example, Albert is just how I might imagine a loving granddad to be. His experience fighting in the Korean War in the early 1950’s, coupled with being a prisoner of war, helped me to show appreciation for his generation, along with themes of honour, respect, and understanding the role that suffering plays to some degree, in our lives.

Then we have Dave and Sharon Soddall who are very funny characters. Their young son, Kevin, is the brains of the family, so you can only speculate (until you read the book) how they try to pull off a holiday scam!

There is nothing spiteful about Dave, and he’s a little edgier than say, someone like Del Boy, while his wife, Sharon, is a Britney Spears wannabe who discovers that there is more to life than money.

Now then moving on to your next book, which I believe has recently been released is a parody on David Cameron, called ‘The Inside Scoop: The Secret Journal of a Prime Minister. Now I hope you’re not having a go at our glorious leader are you?

Ha ha! It’s hard not to make fun of Cameron David, as he is called in his secret journal!

I enjoyed scrolling through Cameron’s entire Twitter history, and I rewrote much of his ideas and diary from about 2010.

A friend of mine, Chris Bambrough, is a cartoonist and artist, and shared a similar passion in making a parody of the supreme leader, so he drew over forty cartoons for the book to suit some of my own jokes and material.

It’s a fun book, with biting criticism of his policies, relationships with other politicians and the absurd world that must exist inside his head.

I’ve noticed that The Inside Scoop also has some great reviews. Tell me, how important are these reviews to you?

Reviews are the air inside a writer’s lungs. Yes, we might try to artificially write without them, but for me, the joy of writing comes hand in hand with the feedback that others share with you.

Having said that, I must also say that I listen very carefully to what readers say. This was the main motivation for writing the second edition of Missing Gretyl, which was released several months ago, with a new cover, new opening chapter and a jolly good polish – one of the benefits of self publishing my first book!

One thing I’ve never even considered myself, is writing comedy. Why did you take this path?

I think the answer is that you write what you are, what you enjoy and what you know.

Storytelling is a vital component of everyone’s life. Whether it’s visual or oral, from childhood we have been influenced by stories. For me, comedy is the perfect medium to write about sorrow and happiness, trials and triumphs; basically, life.

By nature, I love to encourage others, so when I have something serious and important to say, it’s not long before the vehicle of humour arrives to make the journey more bearable, even enjoyable.

Would you ever consider writing in another genre?

Yes, I am currently writing a drama with the working title of No Idea (although I’m playing with the title of Joe Average, as well). Though there are some strong social comments and issues in the story, there is still plenty of humour. There I am – returning to the comedy again!

I understand, apart from comedy you also dabble in screenwriting. Can you tell me a bit more about what you have achieved in the past with this and please tell me if you’re working on anything at the moment?

Since my early teens, I’ve been that annoying person in the room, offering commentary on scenes in the movie! I think it’s the creative spark in me that sees something and wants to shape it.

I wrote the screenplay to Missing Gretyl, because I initially saw the story as a movie. In fact, many of the reviews on Amazon (along with a few from people in TV and film) have commented on how great it would be for the screen.

I have had some wonderful feedback from a production company owned by the actor, Idris Elba, called Green Door Pics. They showed strong initial interest and said it had them in stitches and was a wonderful piece of writing. They aren’t going ahead with it for now, but who knows, in the future, maybe?

What is your preference, screenwriting or novels?

This is a difficult question to answer, because if Missing Gretyl arrived on the screen, I might venture further into screenwriting. However, the joy of writing a novel is that so many people get to read your work, so for the foreseeable future, novels are the way forward for me.

Are there any themes or messages in your books?

Yes, strong themes of love, forgiveness, temptation and trial. I could add many more to the list, but let’s summarise it by saying that ‘I do life…’

When you first started writing any of your novels; did you plan them first or did you just get straight into the writing?

The idea of Missing Gretyl was played around with for a time, before I threw myself into writing; but the first story I wanted to write, is one that I hope will arrive in the next few years, called, ‘The Collar.’ It’s a bit of a secret for now, so I’ll continue to learn more of my craft before sinking my teeth into it.

If you did have some sort of plot worked out first, did you use something like Scrivener or have you sticky notes plastered all over your desk?

For me, the steps for writing Missing Gretyl were relatively straightforward. I wrote one chapter at a time, reflected on how the characters might behave and where they wanted to steer the story. Of course I had a rough outline of key arcs within the story, but I asked the characters to take me there.

I have Scrivener on my laptop, but haven’t used it yet.

Now I know this is a common question for writers but tell my why do you write and what made you start writing in the first place?

I write because I love to bring joy to others. I also find it a creative outlet to express my thoughts and feelings, so I am blessed to share my words, for in giving, I also receive.

Another common question: Where do you get your ideas?

If for any reason you were unable to write; what would you do.

I would be involved in other creative projects of an entrepreneurial nature.

Do you know of any unsung heroes in the writing profession that deserve a mention?

Wow, it’s hard to know where to start, really. I wouldn’t like to name folk, because there are too many and I wouldn’t like to leave anyone out, but basically, anyone who pours their heart and soul onto paper (or a laptop) is worthy of respect.

After I launched the Facebook group, ‘Author Chat Forum,’ in April 2015, I hope that by sharing my time with others, I’m giving something back to other writers.

Apart from comedy which other books do you enjoy reading?

I enjoy a variety of books that involve drama and relationships, but I don’t do horror, gross-out violence, erotica (just reading, of course!).

I’ve noticed you are now living in the north of England and taking a licking to mushy peas. How come a lad from Romford ended up in the North? Is there a story to be told?

To answer this, I’d point you to my author bio – there’s plenty of banter and insight there.

Apart from writing what else are you really proud of?

My wife, Solana, two boys, Ruben and Freddie and my family. We are a team who love each other deeply, and work hard and play hard together x

Simon I wish you the very best of luck and success for the future. Many thanks for taking some time out to answer my questions.

Thank you for asking me some excellent questions! May your writing be blessed, Peter!